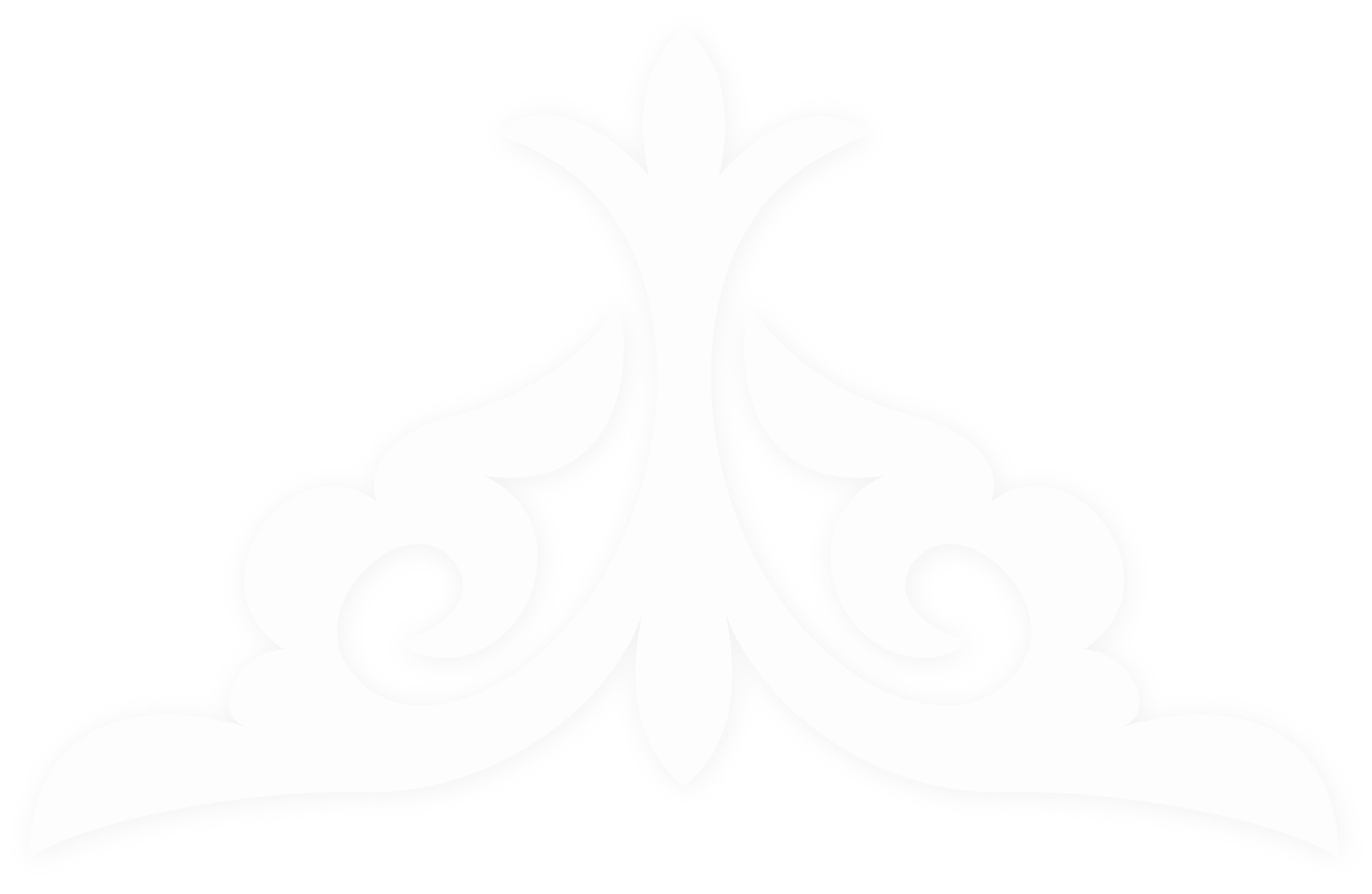 About Foundation
Review a full report 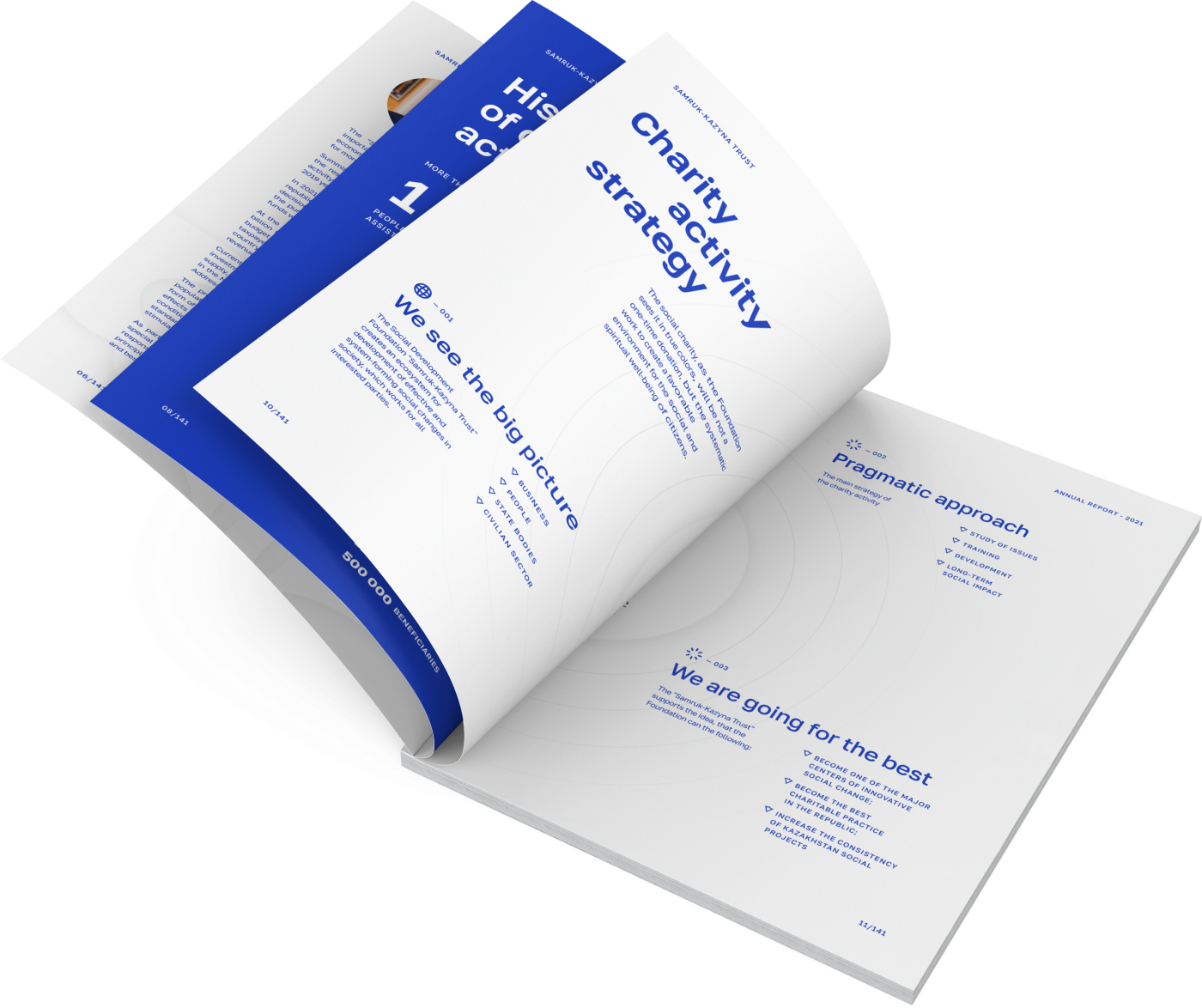 Since its establishment in 2016, the "Samruk-Kazyna Trust" Foundation has been constantly investing efforts and funds in the implementation of large-scale social initiatives aimed to help a large number of people who need support.
These are the elderly people, children with special needs, orphans, citizens with serious illnesses, young and talented schoolchildren and students.
As seen by the Foundation, the social charity is not a one-time gratuitous aid, but a systematic work to create a favorable environment for the social and spiritual well-being of citizens.
That's why the projects invested by the Foundation have existed and developed for many years.
For example, "Healthy Children" project is among of these, which involves the organization of rehabilitation courses for children with neuro-orthopedic disorders from socially vulnerable segments of the population.
CHILDREN HAD COMPLETED 21-DAY REHABILITATION COURSES IN 2021 YEAR.
1360
the President of the "Kasiyettі Zhol" NGCF
Gulmira Abeldinova

Every year, more than 1,500 children with neuro-orthopedic disorders from low-income families and the infant orphanages were able to visit them.
Our experience was so successful and in demand in the parent community, therefore within three years, our project grew to 3 rehabilitation centers, thanks to the support of the "Samruk-Kazyna Trust".
Hundreds of children have learned to sit, walk, talk, eat and play on their own, went to school along with their peers."
"Once we have started the project "Healthy Children" with one center, which received 20 children a month.
1 850 000
citizens have been covered with assistance Over the entire period of the "Samruk-Kazyna Trust" Foundation existence
more than
500 000
of them became beneficiaries of charitable assistance
In general, in 2021, 32 large social projects were implemented in Kazakhstan with the support of the Foundation.
As part of them, the Foundation focused on helping Kazakhstanis during the coronavirus pandemic and scaling up social projects in the regions.
All regions of Kazakhstan

32
large social projects
7,5 bln ₸
the budget of the charity program in 2021
IMPLEMENTED projects BY THE "SAMRUK-KAZYNA TRUST" FOUNDATION IN 2021
"Gift children a life"
"Creation of "Kamkorlyk" rehabilitation centers"
"Different-equal. Creation of inclusive society in Kazakhstan"
"Adjustable Hypothermia"
"MEKTEP OnLine - instead of a tutor"
The project "Gift children a life" helps children with serious diseases untreatable in Kazakhstan to receive treatment in foreign clinics.
"Gift children a life" project
PROJECT PURPOSE
158 families received the counselling support, 149 children were transferred for treatment.
WHO HAS MANAGED TO GET HELP?
Zhaniya Ulmaganbetova, a resident of Kargaly village from Almaty region, gave birth to a girl before the term, at 28 weeks of pregnancy. When the baby named Aisha was discharged, the parents were informed about the diagnosis - retinopathy of premature babies. This is a very serious disease of the eyes, which develops in most cases in deeply premature babies and characterized by a violation of the eyes retina formation. Sometimes the disease can lead to absolute blindness. In the case of Aisha, she had the 5th degree of disease - total retinal detachment of both eyes. 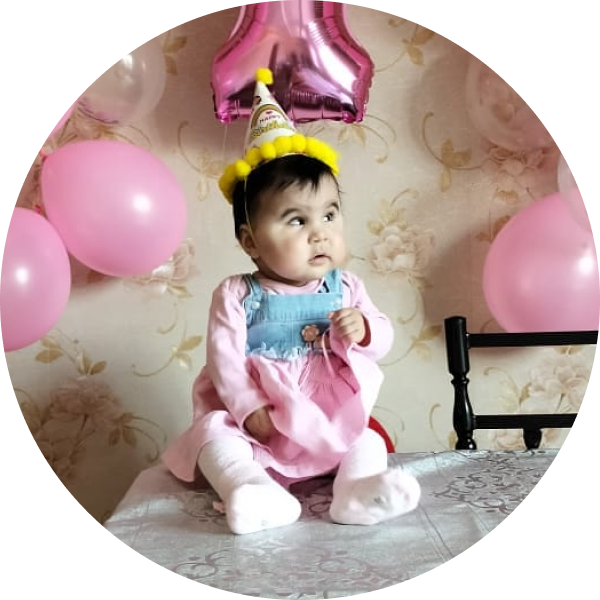 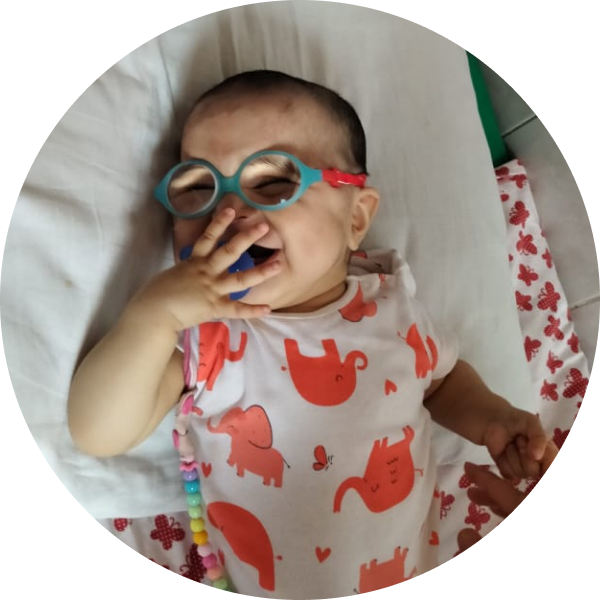 "In May, it was necessary to go to St. Petersburg again for examination and possibly make the second operation. We have contacted to your foundation. You have paid for us to have a second operation on our right eye. On the 20th of October, the second operation was performed on the left eye and again with your help. We are overwhelmed with the kindest feelings. I found it was difficult for us to articulate our feelings. Thanks to you, the world is becoming kinder and many who need support have the hope. You had helped change the fate of our girl for the better, gave her the opportunity to see a beautiful world. How happy we are when our girl looks at us and smiles!" - Aisha's mother expressed her words of gratitude.
The project is aimed at creating rehabilitation centers based on functioning medical institutions in the regions of the country. The key task is to form all the necessary conditions for modern and high-quality rehabilitation of children diagnosed with cerebral palsy and neuro-orthopedic disorders.
"Creation of "Kamkorlyk" rehabilitation centers" project
project purpose
The planned annual coverage is 6,000 children.
WHO HAS MANAGED TO GET HELP?
15 year-old Aizerе from Ust-Kamenogorsk was scheduled for an orthopedic operation that would improve the condition of her joints. But the parents were afraid that they would not be able to provide the girl with a full-fledged postoperative rehabilitation. There were no special institutions in their region. 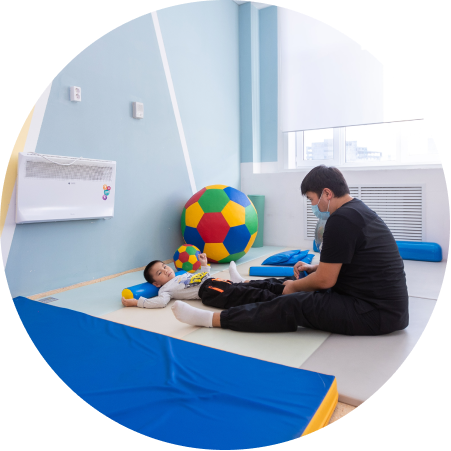 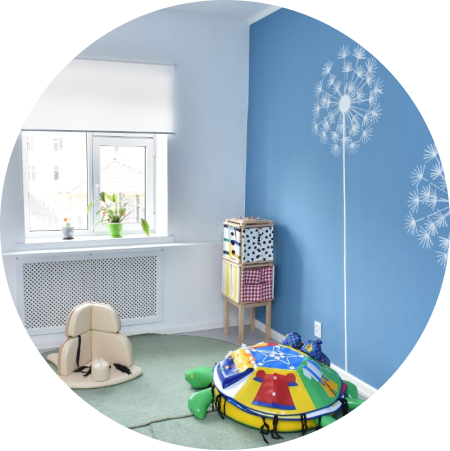 Having learned that a modern rehabilitation center was opened in their native Ust-Kamenogorsk in the Center for Mother and Child, the girl's parents decided on surgical treatment of the joints. After that, Aizere underwent rehabilitation at the Kamkorlyk center. Now the girl can move more freely and actively.
"When your special child gets help and moves forward, life becomes lighter and easier," - says the girl's dad Baglan Kasymovich.
The project aims to empower children with special needs in accessing education and development. As part of the project, the work is underway to expand the network of cabinets for psychological and pedagogical correction in the Republic of Kazakhstan and Resource Centers for Inclusive Education on the basis of general education schools in Kazakhstan.
"Different-equal. Creation of inclusive society in Kazakhstan" project
project purpose
Thanks to this project and other similar initiatives, over 83,000 "exceptional" children (about 76%) are now enrolled in Kazakhstan.
WHO HAS MANAGED TO GET HELP?
"In October, 2021, a boy named Yerbatyr came to our center, who had a visual impairment. At first, he was constrained and laconic, afraid of harsh sounds. It required the help of specialists in coordinating the movement of the hands, the development of fine motor skills, teaching the child to distinguish shades. The work was carried out according to the individual-developing plan of Yerbatyr, which took into account all the nuances and tasks in development and correction. 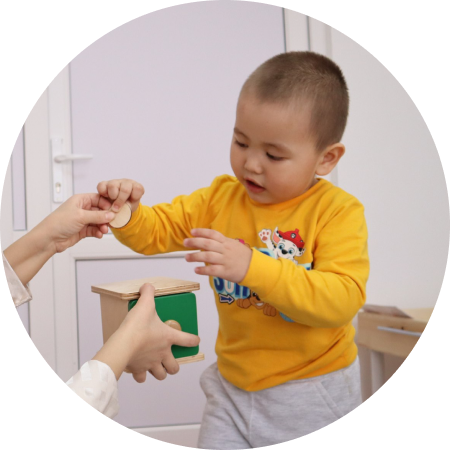 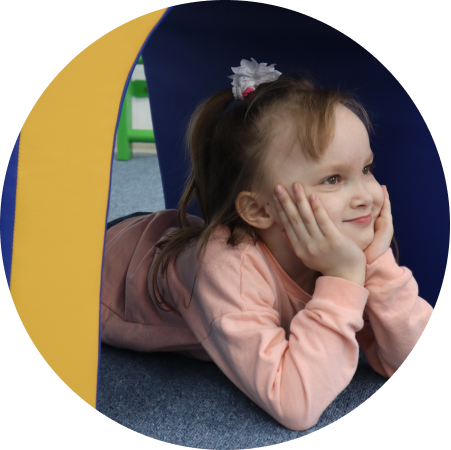 "During the cooperation and with the support of the Social Development Foundation "Samruk-Kazyna Trust", 15 OPPC-s have been opened, which serve as supporting institutions in their regions to provide psychological and pedagogical services to children with special needs and 17 Resource Centers for inclusive education in Kazakhstan."
MARZIYA YAKUPOVA, HEAD OF THE DEPARTMENT OF PSYCHOLOGICAL AND PEDAGOGICAL CORRECTION OF FAMILIES
SAULE BEKSULTANOVA, PROJECT MANAGER OF "DARA" FOUNDATION
On the second cycle of classes, after working with specialists, improvements in the formation of basic skills were noticeable. The boy began to form tactile-sensory processes: he began to distinguish between different surfaces by touch. If earlier he could not perform movement with his eyes, now he does visual gymnastics without difficulties. Now our Yerbatyr is a cheerful and positive child. We believe that the right differentiated work, using special methods, forms and means, creates comfortable conditions in training and development, which will help Yerbatyr to socialize and achieve great success in the future."
Procurement and installation of medical equipment for the immediate treatment of hypoxic-ischemic encephalopathy in newborns.
"Adjustable Hypothermia" project
project purpose
During the period of the project, a session of therapeutic hypothermia was performed on 7 newborns born with severe and moderate asphyxia. All seven children were safely discharged to their families with improvements.
WHO HAS MANAGED TO GET HELP?
Ryspek Saltanat from Balkhash cannot remember the birth of his daughter without tears. Ademi was born with severe hypoxia - oxygen starvation. The child swallowed amniotic fluid and could not breathe on her own. 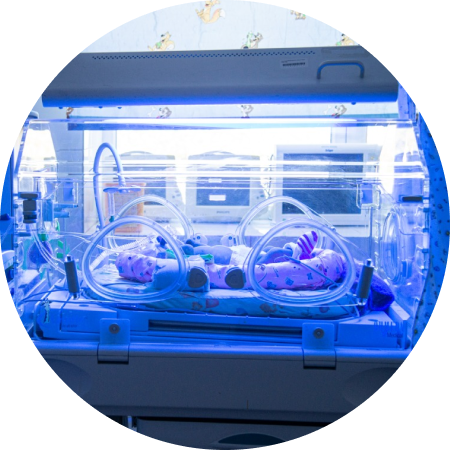 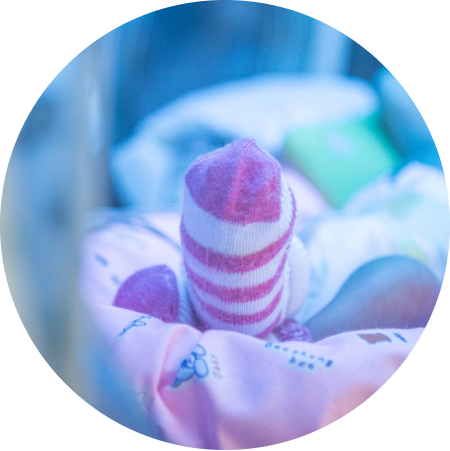 Then the events developed, as in the cinema - next day Ademi was taken by plane to Karaganda, to the Perinatology Center of the Regional Clinical Hospital. There is a hardware complex of therapeutic hypothermia - equipment that helps such children.
"She didn't move, she didn't open her eyes. Ademi was connected to a hypothermia apparatus in the intensive care unit. A week later, I myself arrived in Karaganda, before the doctors did not let me go in the hospital of Balkhash," - says Saltanat.
A week later, Ademi was able to move and breathe on her own. Now she is doing well: she is at home with her mother in Balkhash.
"MEKTEP OnLine" is a free video tutorial for schoolchildren that lasts no more than 10-14 minutes. This time is enough for teachers to explain a complex topic in simple words. And most importantly, they are laid out consistently, in accordance with the Kazakh school curriculum.
"MEKTEP OnLine - instead of a tutor" project
about project
Lessons for students in grades 5-11 are available on the YouTube platform in Kazakh and Russian in five subjects, each of which is represented by its own channel - mathematics, geometry, physics, chemistry and biology.
More than 3 000
lessons
More than 370 000
SUBSCRIBERS
More than 20 000 000
views
At the same time, all initiatives are united in one:
The desire to make the world better by helping others. This is the main mission of the foundation.
Find out more in each of them here
The mentioned above are only a few projects that were implemented by the foundation in 2021.
HOW TO APPLY TO THE "SAMRUK-KAZYNA TRUST" FOUNDATION?
"Samruk-Kazyna Trust" considers appeals that come to the Foundation from non-governmental organizations and relate to Kazakhstanis who need assistance.
Applications receiving channels:

— Targeted delivery
— Email: info@sk-trust.kz
— Acceptance of electronic applications through the official website: www.sk-trust.kz
1 120 applications were received for 2021 year by "Samruk-Kazyna Trust"
"2022 is a year of change for us.

We are significantly strengthening our approaches towards openness, efficiency and transparency. I would like to express my gratitude to all non-governmental organizations who are also our partners. "Samruk-Kazyna Trust" effect of the activities would not be so large without their ideas, indifference and responsibility.
We are confronted big tasks and it is devoutly to be hoped that we will not to let down the people who believe in us and rely on "Samruk-Kazyna Trust".
Together to the heights!"
General Director of CF "Samruk-Kazyna Trust"
Alfiya Adiyeva
Review a full report:
Ru
Kz
Eng
Contact information :
info@sk-trust.kz
+7 7172 57-68-98
+7 7172 24-80-15
pr@sk-trust.kz
www.sk-trust.kz